NDHT and RD&E integration: bringing together our Board and leadership teams

I recently shared the news that our regulators, NHS England and NHS Improvement, have given Northern Devon Healthcare NHS Trust (NDHT) and the Royal Devon and Exeter NHS Foundation Trust  (RD&E) the go ahead to proceed to the next stage of our integration journey.

In order to support the next stage of joint working to become one organisation, from 1 January this year we have brought together our Board and leadership teams.

As terms of office expire for our current NEDs across both sites, our two Boards will gradually come together to form a joint Board. Over time, this will be made up of:

This Board will be supported by our joint executive team, which for both NDHT and RD&E includes Suzanne Tracey as chief executive, Adrian Harris as medical director, Pete Adey as chief operating officer and Hannah Foster as director of people, as well as three new joint roles:

Information about these new joint roles is included below.

In January 2021, we welcomed Carolyn Mills to the role of joint chief nursing officer. Carolyn will be responsible for leading and developing our nursing, midwifery and allied health professionals across both sites.

Some of you may remember Carolyn, who was the director of nursing at NDHT from 2005-2014. She retains a good understanding of the system in Devon and is passionate about how she can help lead continuous improvement to deliver safe, high-quality patient care across Northern and Eastern Devon. Carolyn also has recent experience of supporting NHS trusts through an integration process.

Angela Hibbard - previously director of finance, performance and facilities at NDHT - has been successfully appointed as chief finance officer across both sites.

Angela will be responsible for strategic finance management and planning across Northern and Eastern Devon, as well as leading the teams across both sites.

Chris Tidman - previously chief finance officer at RD&E - is taking on a new role within the executive team as deputy chief executive.

As well as deputising for the chief executive, Chris will take on responsibility for estates, programmes, strategy and partnerships, and communications and engagement.

As a result of these developments, the overall joint executive team is as follows: 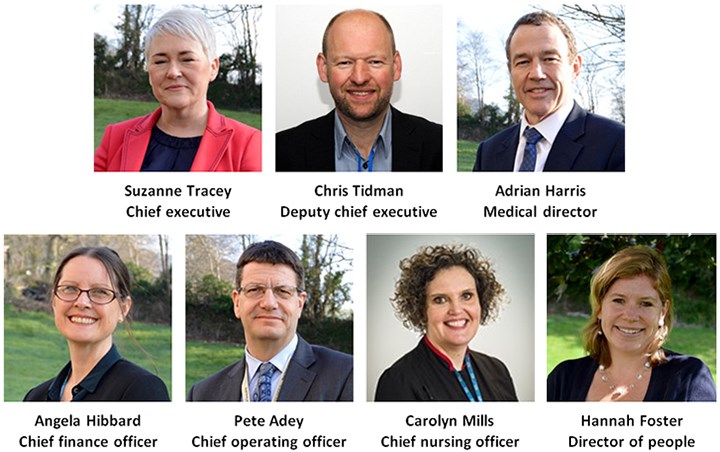 The joint executive team will lead the process as NDHT and RD&E become an integrated organisation and will operate at a strategic level across both sites.

In January 2020, Pete Adey, our joint chief operating officer, set out his plan to retire in the Autumn. Due to the implementation of the electronic health record MY CARE at RD&E and the response to the COVID-19 pandemic across both sites, Pete agreed to stay in his role until the end of the 2020/21 financial year.

Pete qualified as a nurse in 1988 in London and has worked at the RD&E since 1995 in a variety of clinical and managerial leadership roles, more latterly as chief operating officer for the last four and a half years. Pete has worked in a joint role across RD&E and NDHT since 2018, and his contribution has been of huge benefit to both organisations.

Clearly Pete’s departure will be a huge loss and we will be taking the opportunity to celebrate his contributions over the years in the forthcoming months.

A recruitment process for the joint chief operating officer role will launch shortly.

We will continue to keep you updated regularly as our integration plans develop and will ensure there are plenty of opportunities to be engaged in this process.